Elias Rubenstein is entrepreneur, author and lecturer. He studied „Leadership and Management“ and promoted in economics. For his outstanding performances and superb achievements, he has been awarded the university title of an honorary Doctorate and the academic accolade of the honorary senate. Further, he was honored with “Amabassador for Peace” by the Universal Peace Federation.

His publications and works comprise the doctrines and symbols of the Kabbalah, Hermeticism, Jewish and Christian Mysticism (Gnostisicm), spiritual Alchemy, Initiation and the mysteries of the Rosy Cross and Martinism. 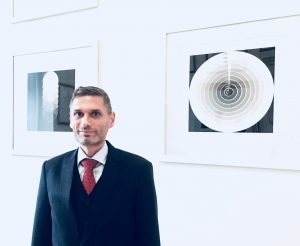 In our Web-Shop you can buy mystical Christian and Jewish Artwork from Elias Rubenstein.
Limited Art Prints.

The term “Hermeticism” comes from the name “Hermes.” In Greek mythology, Hermes is the intermediary between mind and matter. Hermeticism holds methods for unfolding spiritual abilities in order to understand the meaning of existence, to become connected with the spiritual light, and to build an inner, permanent relationship with the Creator of the All.

The Hermetic wisdom tradition has kept proven tools for the spiritual unfolding of mankind for thousands of years. It also holds verifiable answers to the most important, fundamental questions in life.